Rebecca Parrish is a filmmaker with a track record for making incisive, ground breaking films with a progressive and often feminist bent to them.  WRUN Admin Jen Giacalone sat down with Rebecca recently to chat about her current project, Radical Grace, which follows the Nuns on the Bus and the other Catholic sisters in their fight for social justice and their struggle against the Church patriarchy.  Followers of the page know that we are NOTB fangirls, so the editors will not bother to hide their glee.

WRUN:  So, I have to ask… how did you and the sisters find each other? Did you seek them out, or did they approach you? 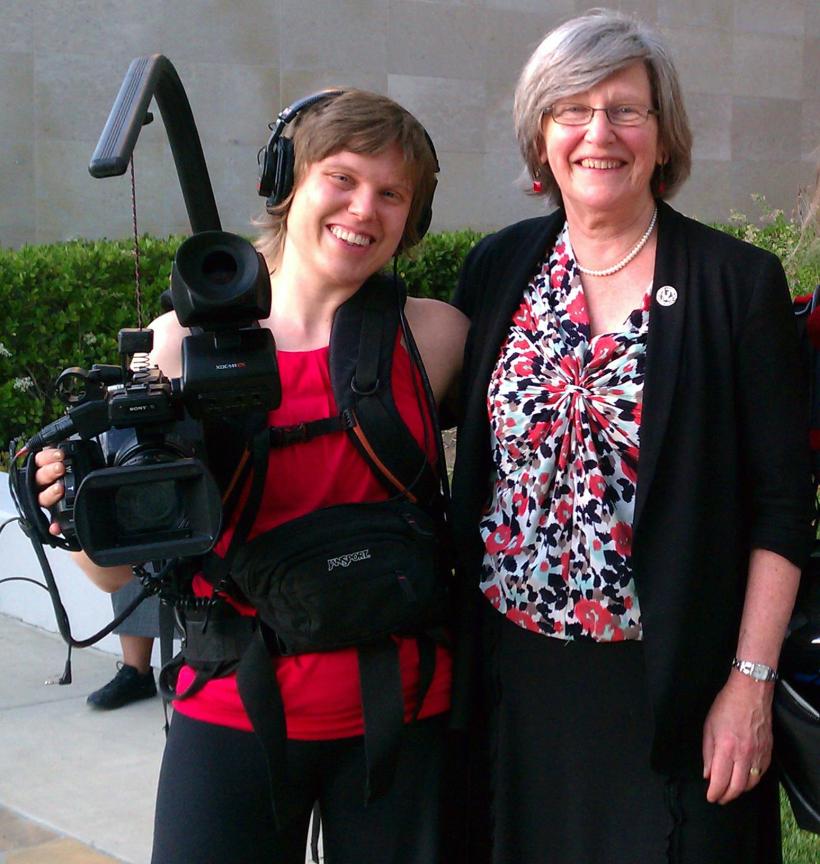 RP: A friend of a friend was a friend of Sister Jean’s.  So our mutual friend connected us and we thought there was a film there. Then we approached Jean.  That’s the short version.

WRUN:  Did you know immediately what the story was that you were going to try to tell or did that reveal itself over the course of working with them?

RP:  I knew I was interested in a couple of things: What it means to do social justice as a spiritual practice, and what it means to be a feminist in a patriarchal institution.

There are the two opposing concepts of spirituality that are illustrated in this story. The hierarchy is typically all about who are the insiders and who are the outsiders, who is closer to God and who is further, and how do you get to heaven. The sisters are all about how we’re all interconnected and how we need to be there for each other, and, as someone who’s not religious per say but sees value in spirituality, their story and approach to this concept of God in a really broad way really appealed to me.

WRUN:  It must be an interesting learning experience for you as a non-religious person. What is like to experience the Church through their eyes?

RP:  It totally changed my conception of what “the church” is.

RP:  It used to be that the hierarchy defined it for me. Whatever the pope and bishops say Catholicism is, is what it is.  Now I see that it’s the people, and the community they have built together who define it.  The sisters and other lay people have just as much “authority” in my eyes, if not more ‘moral authority,’ than many of the bishops.  Before, I just never thought about it that hard.

WRUN:  I think that’s something that would be surprising to a lot of secular folk who are a little hostile to religion in general.

RP:  Yeah, totally.  It was like, ‘Catholics believe XYZ, the pope is infallible…” Now I see that it’s all much more contested.  I think that’s part of what gives faith such a bad rap: the people on the outside take those who claim to be the representatives at face value.

WRUN:  So, there’s been a bit of hostility between “The Church” and feminism. Feminists often feel that religion, and Catholicism in particular, upholds dogma that is oppressive to women.  Do you think that this project can have some impact on the way that these groups view each other?

RP:  I hope so.  I think that secular feminists in particular have a lot of assumptions about people who have maintained their Catholicism. I certainly did. I think this film debunks some of those stereotypes.

WRUN:  What would be the one thing that you would want secular feminists to walk away with after seeing it,  if you had to boil it down like that?

RP:  Ooh, that’s always a hard question for me.  I tend to approach filmmaking more as an exploration and asking questions than with a particular agenda.  I guess I want people to see opportunities for coalitions and collaboration. I think the separation between faithful feminists and secular feminists is a real detriment to their shared goals.  It’s like a divide and conquer thing.

WRUN:  Imagine what could be accomplished if feminism and the church were both bigger tents?

WRUN:   What are the sisters like?  How has it been to spend so much time with them?

RP:  They are really fun.  Another huge thing for me has been seeing how they approach such challenging work with so much joy.  Maybe that sounds trite, but they really know how to party.

But I think that ties in to my interest in spiritual activism, because a huge part of what their spirituality brings to their work is a sense of lightness, joy, and resiliency.

WRUN:  Does most of the film take place out on the road with them, or is it more about what they do within their community?

We filmed with Simone at NETWORK, lobbying on Capitol Hill, on the road with Nuns on the Bus, and at her Motherhouse.

We filmed Jean working with formerly incarcerated people at St. Leonard’s house and making decisions with people at her Motherhouse.

And we filmed Chris organizing Catholics to work for church reform in parishes and leading a pilgrimage to sites of early women leaders (who have been obscured) in Rome.

WRUN:  I saw a little of Jean’s story in the trailer and thought that looked really moving.

RP:  Yeah, it is. Her story spans both her work with the formerly incarcerated and her struggles with the institutional Church.  She doesn’t always see God in how the institution operates, but she does see it in the guys at St. Leonard’s house.

WRUN:  Chris’s story sounds fascinating too.  I think the only notions that a lot of people have about women in the early church come from Dan Brown novels.

RP:  She leads the pilgrimage to the archeological sites, because women leaders often don’t show up in the written history, which was written by men. But they do show up in the art, which is a more direct source in terms of how people lived and how they understood themselves in relation to faith and society.

WRUN:  Amazing.  So tell me about Simone’s story.  Does that follow the health care law?

RP:  That’s part of it.  That and the Nuns on the Bus.  When the US Conference of Catholic Bishops (USCCB) came out in opposition to the Affordable Care Act, she was heartbroken.  She and NETWORK have been working on healthcare reform for a long time. And when it finally started to look like a real possibility, her own church leadership was opposing it.

And, she knew that the USCCB could have a real influence on Catholic legislators, so she crafted a letter that leaders of many nuns’ congregations across the country signed, saying that this law was in alignment with their faith values.  They say that universal healthcare is “the REAL pro-life stance.”

Then her organization, NETWORK, is named in the Vatican censure. And to her, it’s obvious that this is payback for their work standing up for healthcare reform. As she/they become famous as a result of the censure, Simone asked, “how can we use this new fame to further social and economic justice?”

She’s very strategic. The big issue at that time was the federal budget, and Paul Ryan was twisting Catholic Social Teaching to say it supported cutting social services. So she used her new fame to, once again, be a progressive Catholic voice for change.

WRUN:  I have to tell you, we really love that story.

And, of course, there is the progressive Catholic laity who were excited to have a positive public model of what their faith is all about.

WRUN:  Well, you could easily argue that there’s been a real failure of leadership in the political class on these issues.  Do you think Simone and the sisters are kind of filling a void there?

RP:  Yeah. I also think that progressive organizing lost its soul in a way.  It’s very materialist.  Maybe I’m getting too abstract? 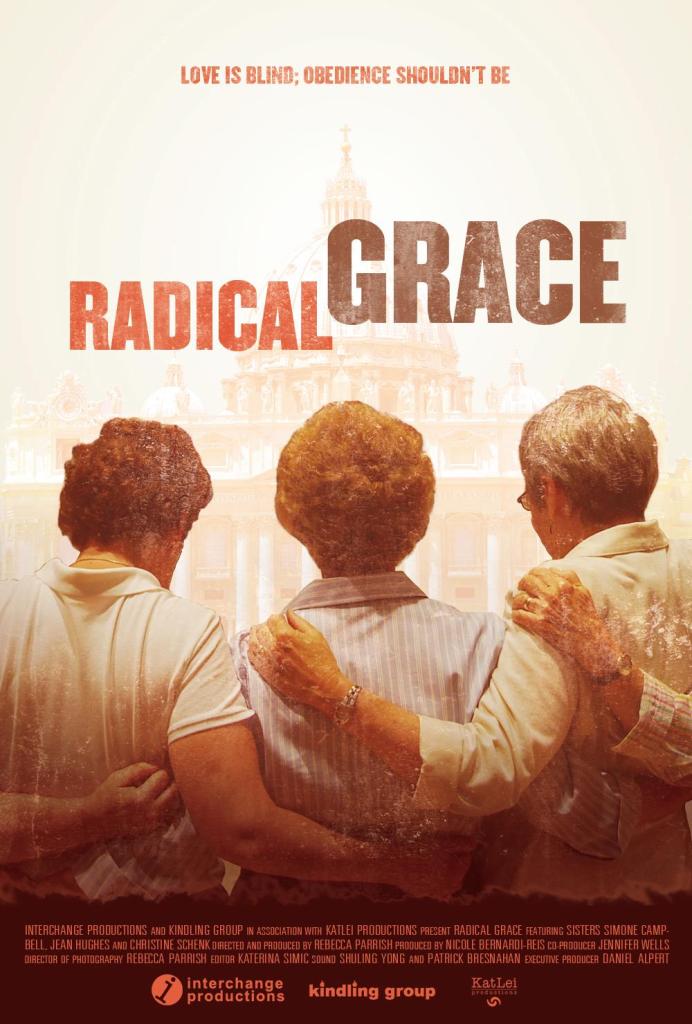 WRUN:  Well, I think there’s something to the notion that you have these big progressive organizations that feel very corporate, because they are.  They have budgets, and staff, and PR firms, and so on.  There’s something about the way that the sisters are doing what they’re doing that is very genuine and uncorrupted.

I think it’s like the humanity, the feeling of connection and interconnectedness drops out when it becomes so corporatized.  But at its heart (no pun intended), that’s what progressive organizing should be about, or that’s what motivates it, and helps people keep going when it’s tough, and builds community and solidarity.

Radical Grace is currently in post-production.  Rebecca and the Sisters are running a Kickstarter campaign to raise the funds to finish and promote the film.  If you are interested in learning more about the Sisters’ work, the film, or how to help, go visit: Bit.ly/RadGraceFilm

An awareness and mobilization site designed to fight back against recent attacks against womens' rights.