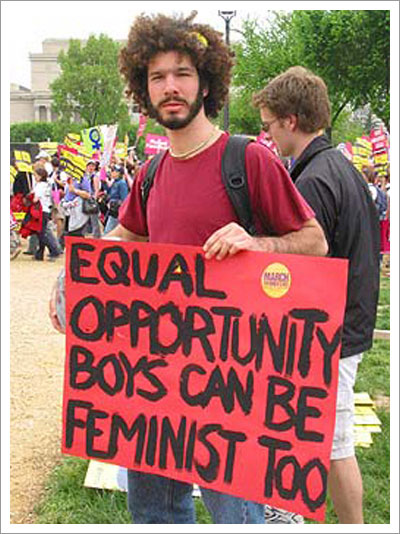 This dude is not Marc, but we like him anyway.

“We hold these truths to be self-evident, that all men are created equal…” –The Declaration of Independence

I believe in justice and democracy.  It is easy to say this, and most would agree out of hand.  But it is harder to truly live in testament to these ideals if the nurse checked off most of the boxes of privilege on your birth certificate.  As a heterosexual, white, middle class, American man who was raised in Christianity, it would be natural for me to defend my privileges.  I could do so subtly, with a ‘that’s life’ attitude, even while proclaiming my support for equality. At one time I didn’t believe that who I was earned me any special benefits above anyone else’s.  Then there was a time when I realized it but denied it.  Now, I acknowledge it freely.  Now I am a feminist.

Girls are bombarded with mass media messages that manipulate their body image.  From as young as the age of 5, they begin to internalize this.  Doctor Barbie is the same shape as Cheerleader Barbie.  “Little girls, you can strive for success in life, but only if you stay impossibly gorgeous.”  More than a third of teenage girls believe they are overweight, and more than 90% of all people with a serious eating disorder like anorexia and bulimia are teenage girls.  Some teenage girls push their bodies toward dangerously unhealthy goals, like achieving a “thigh gap.”

As they enter university, young women are faced with discriminatory attitudes about their ability to succeed in important fields.  In January, 2005, Lawrence Summers, the President of Harvard, said that fewer women advance in math and sciences because of biological differences between the genders.  Donna Nelson, Chemistry professor at the University of Oklahoma characterized his comments as something that she’d heard her entire life.  Summers’s comments may be unusually blunt, but they are indicative of a subtle, widespread, institutionalized sexism within academia.

After college, women face discrimination at work.  While women have won beachheads in virtually all other career fields in the last few decades, a dichotomy persists; high-earning and powerful positions are still predominantly held by men.  The workforce of Walmart, America’s largest employer, is 72% female, but women only comprise 33% of its managers.  Following a class-action lawsuit claiming discrimination, in June, 2011, the Supreme Court ruled 5-4 in favor of Walmart.  The ruling effectively put the burden of proof on the plaintiffs to prove a central policy of discrimination and demonstrate its active delegation through levels of management. Whether Walmart actively discriminates against women as a central policy or not, the end result of its corporate culture is that 1/3 of its population holds 2/3rds of its power.  Our legal system refuses to see this as discriminatory or even problematic.

Women also experience discrimination in the form of lower wages.  Among full-time workers, women earn roughly 80% as much as their male counterparts.  In 2010, median income was $42,800 for men and $34,700 for women.  The Lilly Ledbetter Fair Pay Act of 2009 only extended statutes of limitations for discrimination lawsuits.  A new bill, The Paycheck Fairness Act, seeks to close loopholes and incentivize fair pay with legal carrots and sticks.  The act is actively opposed by a number of Republican Congressman who represent districts with some of the broadest wage gaps in the country.

Then, America actually financially punishes women for having children.  The FMLA, or the F*** My Life Act … sorry, I just looked it up … the Family Medical Leave Act only allows 12 weeks of unpaid maternity leave.  This only covers the fourth trimester, the transition period from womb to world.  Mothers need to be with their baby 24/7 during this period, and arguably, much longer.  Still, many women don’t qualify or can’t afford to take unpaid time off.  All other developed countries have maternity leave that is longer and/or paid.  Even countries that are not so developed and not so democratic have better maternity leave than the US.  In total, more than 120 countries have paid leave for new moms, more than half of the world’s nations.

The best countries in the world to become a new mom are Canada, which pays 55% of income for 17 weeks for moms and then 35 weeks for either parent; Croatia, Denmark and Serbia, which pay 100% of income for 1 year; the UK, which pays 90% of income for 1 year; and Sweden which pays 80% of income for 420 days.  Quite a number of the world’s most developed countries provide for some degree of leave for new fathers.  Clearly, long-term paid leave for new parents is a hallmark of modernity, prosperity, democracy and Western Civilization.  It is one of the most tangible ways in which America is slipping behind the developed and democratic world that it was so instrumental in creating.  Modernity is beginning to pass us by, beginning with how we treat our mothers and newborns.  It is cruel and unusual that American social and economic policy rips children from their mother’s arms, forcing them to go back to a job with lower wages beneath a glass ceiling to make ends meet. Fathers don’t benefit from having to work overtime with a newborn at home to put food on the table.  Children certainly don’t benefit when their very existence impoverishes their parents, or forces their parents to put them in daycare the moment they emerge squinting and squalling onto our bright, loud planet.  If maternity leave was the kind of thing that we sanctioned or attacked pariah nations over, America would be the North Korea of supporting its mothers.

A year ago, Republican House Rep. Darrell Issa held a hearing on women’s contraception.  There were no women on the panel.  In response, Sandra Fluke was invited to address a House Subcommittee, in which she argued that student healthcare should insure birth control that prevents ovarian cysts.  Her testimony had nothing to do with sex.  Rush Limbaugh responded by calling her a “slut” and slandering her no fewer than 50 times over several days.  The resulting uproar has cost him and his company dearly in lost advertising.  But the sentiment reveals an undercurrent of virulent hostility toward a public place for women’s voices on healthcare.  There is a deep, angry misogyny that allows Limbaugh to remain on the air.

Beyond being slandered, women face a very real threat of being assaulted.  A quarter of American women in college have been raped and 90% knew their attacker.  Rape is epidemic.  Even worse is the culture of silence and tacit encouragement that accompanies it.  In August, 2012, members of Steubenville, Ohio’s high school football team raped an incapacitated girl at a party and took advantage of her for hours.  They took pictures, shot video bragging about it, and shared it.  Adults in the community have been accused of trying to help cover up the crime.  This is, disturbingly, not an isolated incident.  In Michigan, a high school principal discouraged a rape victim and her parents from pressing charges against her attacker because it would ruin his college basketball prospects.  The alleged rapist went on to allegedly sexually assault another girl 2 weeks later.  Apart from the silence of adults, the use of social media to brag about sexual assault among adolescents is an alarming trend that twists the knife of humiliation in the victim.  An American girl and Canadian girl have recently committed suicide over peers sharing their sexual humiliation on social media.

In virtually every facet of life, women face obstacles and threats that men don’t face.  It is astounding that women (and men) aren’t more up in arms about gender equality in America.  Since the country crossed a symbolic threshold in electing and reelecting Barack Obama, and is racing toward greater acceptance of homosexuality and gay marriage, America is also primed for a fundamental reevaluation of its understanding of gender relations and gender equality.  The time to launch a holistic dialogue on this issue is now.

An immediate remedy would be to support more women for public office.  But there are no easy answers to this problem, and it goes beyond politics.  Feminism may have lost some of its edge over the years.  This could partly be because conservatives have succeeded in making feminism taboo.  In the past generation, the cause of women’s equality has rebooted, with a softer feminism.  But there’s the rub.  Society tells women: we’ll allow you to protest gender inequality, but we demand you do so like a lady.

Men need to transcend ego, acknowledge inequality and support real democracy.  Equality is not a seesaw.  It is a rising tide that lifts all boats, and society does not need to be a zero sum game.  If we subtly insist on our privileges, then we insist on a society without equality.  In such a society, if privilege can be granted to you, it can also be taken away from you and given to another over you.  Without real equality, no one is safe from social, economic and political predation.  This is why Abigail Adams, a Founding Mother of the Republic, sent a letter to her husband John Adams while he was hunkered down at the Continental Congress in 1776 among a group of men making decisions that would decide the fate of the American people for generations telling him, “…in the new code of laws which I suppose it will be necessary for you to make, I desire you would remember the ladies and be more generous and favorable to them than your ancestors.”  It would be nearly a century and a half before America heeded her advice and gave women the right to vote.  Today, 93 years since women’s suffrage, we still have a lot of work to do in forming a more perfect union.  This is why I am a feminist who just happens to be a man.  Happy Mother’s Day, America.