Ella J. Baker is one of the unsung heroines of the American Civil Rights Movement. Lesser than known than male counterparts like Dr. Martin Luther King, Jr., Baker worked for and/or helped found many of the many civil rights organizations we know of today during the her five-decades long career.

Baker grew up up in Virginia and North Carolina, listening to stories of slave revolts from her grandparents. After graduating from Shaw University as class valedictorian, she became active in social activism, first working for the Young Negroes Cooperative League before obtaining a position at the NAACP as a field secretary. In this role, she organized boycotts, raised money, registered voters, and traveled through the South, building a network of black churches and smaller activist organizations.

In 1957, she was part of the team of activists who helped form the Southern Christian Leadership Conference (SCLC) and build on the momentum created by the Montgomery Bus Boycott.  Though Baker was integral to the operations of the SCLC, she was never given the title of permanent director, largely because the organization preferred to have male ministers in that role.  Baker did serve as interim director from 1958 to 1960.

In 1960, Baker witnessed the courage of four North Carolina A&T students sitting in at a Woolworth’s lunch counter in Greensboro, NC and felt compelled to focus her activism on working with young people. She left the SCLC and, with the students, helped found Student Nonviolent Coordinating Committee (SNCC).  Under her guidance, SNCC focused on promoting civil rights through nonviolent direct action and voter registration.  Her guidance to the young people of SNCC had such a profound impact that she was nicknamed “Fundi” – a Swahili word that, loosely translated, means “mentor to new generations.”

In later years, Baker lent her voice and experience to broader progressive causes including  the Puerto Rican independence movement, the anti-apartheid movement for South Africa, and women’s poverty in developing countries. She died in 1986.

The first thing that I noticed was that I was the only woman in there. The young guy working the counter was helping a customer, but he perked up noticeably when I walked in. I was a little nervous. I’d never seen this many guns at one time. Also, I was worried that someone would figure out the Elantra in the parking lot with the Obama bumper stickers belonged to me, and would spot me as the interloper I was.

I spent a few minutes meandering along the counter and looking at the various firearms: a wall of hunting rifles and shotguns, a glass display case with Glocks and revolvers, and another display case with what looked to my seriously untrained eye like collector’s items: antique-looking six-shooters, Colt 45’s with pearl handles, and another very small, very old looking gun with a price tag that read almost a thousand dollars.

The clerk finished with the customer and introduced himself as Frank. I told him I’d moved down here from New York City a few years ago. Never owned a gun before, but was wondering if I ought to. “Yeah,” he said, “we’ve been getting a lot of that lately. Guns flying off the shelves, all first-time buyers.” “Since the Connecticut thing?” I asked. He nodded. “Yeah, kind of before that, like since the election. But definitely way more since the Connecticut thing.” “Connecticut thing,” of course, sounds much better than “the mass shooting of 20 first graders”.

“So what do I need in order to buy one of these?” I asked, gesturing at the case of handguns. “Like, a permit or a license or anything?” Not unless I wanted a concealed carry. Just show my drivers’ license and pass a background check and I’d be good to go. No waiting period? No. There used to be a five day waiting period, but they replaced that with the PICS (Pennsylvania Instant Check System.) “So, what do they look for in the background check? What if I got busted for turnstile jumping?” I asked coyly. Frank laughed. “No, they just look for felonies and uh, domestic misdemeanors.” “Domestic misdemeanors? So, if I broke a plate over my husband’s head, I’d be out of luck?” At this point, two other guys who’d been eavesdropping decided to chime in. “Only if you did time for it,” the younger, more clean-cut of the two offered. “And if it was less than nine years ago.” Everyone chuckled a little.

In case you’re wondering, the Pennsylvania Instant Check System sounds like a great idea, and for circumstances like gun shows, it’s probably very useful. Their hotline is open 7 days a week, even on holidays, and about 60% of those attempting to purchase a firearm are approved in minutes, according to their website. But what if I’d caught my brother having sex with my dog and was so enraged that I decided to shoot him? I have neither a brother or a dog, but let’s pretend. I have no criminal record, and Pennsylvania’s adherence to the notion of putting folks on a do-not-sell list for mental health is statistically nonexistent, so even if I’d been on anti-psychotics or something in the past, there’d still be no need for me to have a few days to cool off before marching into Foley’s and marching out with a semi-automatic weapon to rain destruction on my hypothetical sibling.

Frank brought us back to business. “So, what do you think you’re going to use it for? Would you want to carry something on you? Or more for your home?” I hadn’t thought that far into my lie. Just for my home, I decided. He took a shotgun down from the wall rack. It was a twelve-gauge, shorter than a lot of the others it sat next to, with synthetic wood grain on the stock. He handed it to me. It wasn’t an “assault weapon” but it was still heavy, and plenty “scary” looking. It felt substantial, powerful. Frank was enthusiastic about it for me, because it was relatively light, and you don’t need to be a good shot to use it because it fires a round that is about as big as a film canister. At only $375, it was a great deal. Plus, he said, “they’re never going to ban these.”

The two eavesdroppers weren’t convinced about that last part. “They’re not gonna be happy till they get rid of everything,” the older guy declared. “They’re gonna make us trade these in for a Teddy Ruxpin, so when someone busts into your house, you press the button and he’ll say, ‘Please don’t shoot me’.” More chuckling as he mimed brandishing a Teddy Ruxpin doll at an imaginary intruder.

His younger friend chimed in, “Look, if this is for home defense, you need something where you can just mow the guy down in one shot, so that if you have to go to court, you can claim self defense without it having to be a “he said-she said” thing.”

“If the guy’s still alive then it’s your word against his, but if he can’t testify… well, you were defending yourself. Easy enough to say when you only fired one shot. It’s a lot harder if you shoot the guy four or five times.”

It took me a second to process that he was talking about actually killing an intruder.

“Yeah,” the older guy agreed, “but the good thing is, now, in PA, you don’t have to wait till he’s inside the house anymore, like you used to. With the new castle law, you can drop ‘em outside the house now. You just have to be able to say you felt threatened.”

“You ever shoot anyone?” I asked him.

He laughed but didn’t answer right away.

Frank interjected. “No, but he has threatened to shoot someone, and sometimes that’s all you need. You pump this thing-” He took the shotgun from me, and pumped it once, and it made that sound –chk-shhck!– exactly like in every movie you’ve ever seen. “-and burglars know what that is, and they get the hell out.” 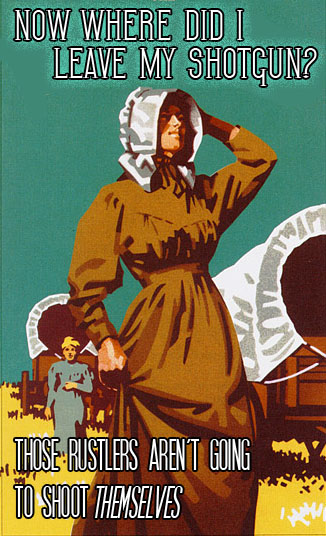 I took it back for a moment more, pumped it once myself. It made that sound again, chk-shhck! I held it up, probably incorrectly. It felt… well, badass. I had a brief passing urge to say, “Make my day.” I flashed back to Technicolor westerns with stoic frontier wives. I thought, This is why people want these.

I handed it back to Frank and told him I wanted to do more research. I thanked him and left, hightailing out before anyone got a load of my bumper stickers.

Owning a Glock doesn’t make you Chuck Norris any more than owning a Fender Stratocaster makes you Eddie Van Halen, but emulating those guys… that’s why you buy those things. You’re envisioning your own blazing, electric moment. If you’re a musician, you can go through the motions in practice, but those licks you play in practice have to be so embedded in your muscle memory that they happen perfectly, even under the pressure of the spotlight. And much like playing an instrument, gun ownership, if it’s to be what you imagine, is something you commit to in a similar way; buying and maintaining gear, practicing, and so on. So that you can make your hands do what you intend them to do in that moment of truth.

But I didn’t hear about that at Foley’s. If I had wanted to, I could have plunked down $400 and walked out with a shotgun without raising anyone’s eyebrows, regardless of the fact that I would not have the first clue how to handle it. In the time I was there, I didn’t hear a word about safety. Not a word about storage. Not a word about how much practice it takes to get good at shooting. You hear about how great it is that you can defend your home. You hear about which rounds blow the biggest hole in someone trying to break and enter. But the damn thing isn’t much use to you unless you commit to the equipment, the training, the practice, and most importantly, the idea of killing.